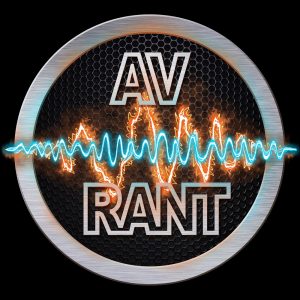 Our Listeners of the Week are Clint DeBoer and his family, who provided a safe home for Tom and Tom’s family to ride out Hurricane Irma. We truly cannot thank the DeBoer family enough. And the least we can do is check out Clint’s website, Pro Tool Reviews, where you’ll find superb information for tools users and tradespeople. We also want to thank Josh Pollard from The Digital Media Zone for talking us up to Accessories4Less when we pointed him their way. Check out Josh’s new podcast, Story Players, where they recap and review story-driven video games. And Christian and Kris both took SVS’ recent customer survey, where they noted that AVRant Podcast is among the options for letting SVS know where you heard about their products.

Lee Overstreet co-hosts with Rob H. this week, and we get a bit extra rant-y. Tom and his family are safe, and we look forward to him returning to the podcast as soon as possible.

In the news, CEDIA brought official announcements of the Sony VPL-VW285ES, the least expensive genuine 4K projector to date, along with the VW385ES and $25,000 laser-based VW885ES. We also saw the JVC X590, X790 & X990 projectors introduced at lower price points. And Epson is keeping their wobble-K projectors the same this year, but introduced a 1080p, laser-driven, ultra short throw LS100 for $3,000. The Optoma UHZ65 brings laser-driven 4K DLP to the $5,000 price point. Infinite Gary sent us a link detailing several new Monoprice Monolith products with THX certification. And the Emotiva RMC-1 16-channel Pre-pro was demoed, with verbal confirmation that it can run a 9.1.6 Atmos configuration. Disney will keep exclusive streaming rights for Marvel and Lucasfilm movies in 2019. And Ultra pure green LEDs mean Rec. 2020 might be possible using LED light sources.

Jose confirms the Elite VMAX motorized projection screens lack the ability to manually set how far they drop or rise when you press the button on the remote. And Robert Z. suggests that streaming lossless audio via DLNA is another scenario where eARC could be useful.

PJ wants an affordable, compact speaker upgrade, but he sits fairly far away, so we suggest the HSU HB-1 MK2 Horn Bookshelf speakers. We also discuss buying Ultra HD Blu-rays strictly for audio, and recommend the Samson QH4 4-channel Headphone Amplifier for connecting multiple pairs of headphones. Mike L. asks about the tuning options of the HSU VTF-2 MK5 subwoofer, and whether the ELAC Uni-Fi UC5 Center is a good match for the ELAC Debut B6 bookshelfspeakers. And Don G. asks about positioning his bi-pole Surround speakers, how he should adjust his seating and Atmos positions if he gets a larger TV, and whether he can use his older B&K 507 AV Receiver as just an amplifier.

Jonathan F. sent us an article to discuss about a Utah law that bans movie theaters that serve alcohol from showing movies with nudity or sex scenes. Josh B. gets some clarification on the settings needed to use his 7-channel Outlaw Audio amplifier with his Pioneer Elite LX801 AV Receiver. And Josh Pollard wants a basic 5.1 AV Receiver that can handle 4K HDR, so we suggest the Yamaha RX-V383 from Accessories4Less, which is scheduled to receive Dolby Vision pass-through support later this year.

Infinite Gary asks about the practicality and usefulness of the 8K resolution TV announced for Japan by Sharp, and he also wants to know what visible difference a laser light engine makes in a projector versus a lamp. Marc N. got a taste for Front Wide speakers thanks to Rob’s meddling, so now he’s wondering what he’d have to buy to make them a part of his future Atmos setup. And David B.’s wife wants new, more attractive speakers that can still blast out high volume levels capable of filling their whole house, so we suggest going high efficiency with some Klipsch Reference Premiere speakers.

Jon wants a very slim, on-wall Center to match his Klipsch Icon VF35 Towers, so we recommend the Klipsch Gallery G-28. Andrew gets our advice for di-pole Surround speaker and Atmos speaker positioning. And we give Karl credit for prompting us to rant, big time, about the latest HT Guys interview with David Dicks in which he claims to “bust speaker myths”.

Our Listeners of the Week are George for his donation, as well as Martin for letting Oppo know he bought a UDP-203 UHD Blu-ray player because of us, Jay for telling Gary Yacoubian at SVS that he bought four Prime Elevation speakers because of Tom’s review, and a huge thanks to Mike for speaking so highly of us to Mark at Accessories4Less that Mark has decided to send Tom a Pioneer Elite Atmos Receiver (which pack a lot of amplifier power and a 3 year warranty at attractive prices over at A4L).

Tom is away this week, so we’re very happy that Producer Austen was able to co-host with Rob. You can check out Austen’s other podcast over at We Watch Movies Podcast.

Marc praised SVS’ build quality, especially their metal subwoofer grill that stood up to some forklift abuse. Fred got a quote from EluneVizion and discovered that Seymour AV projection screens are still slightly less expensive in the USA. George heard our voices in the back of his mind telling him his speaker wires were to blame for his Receiver going into protection mode. And Mark shared a successful Denon repair story.

Michael S. asks if a single subwoofer could be paired with a single tower speaker that has a self-powered, built-in subwoofer, rather than having to use both self-powered towers that would result in less than ideal placement. Byron S. is loving having four subwoofers, but he wonders about headroom, hitting full Reference Volume, and what he should do to accentuate the most tactile bass a little bit. And Justin B. would like to better understand binaural recordings, and wants to know why all (or at least more) recordings aren’t made that way.

Blaine D. wants to maximize his upgrade budget, so he asks about replacing Surround speakers, replacing Atmos speakers, replacing his subwoofer, or just adding a second sub. Nathan D. has questions about eARC – enhanced Audio Return Channel. And Jon gets our thoughts on the Paradigm Millenia LP on-wall speakers, which leads to some suggestions to check out Revel on-walls, Martin Logan Ultra-Slim Motion, or KEF T Series speakers.

Infinite Gary wants a “final word” on Surround Back speakers, asks about HDR10+ for projectors, wants to know what a 4:4:4 12-bit input would be useful for, and confirms what visible improvements we’d expect to see with a genuine 4K resolution projector. And Bobby M. wants a comparison of the SVS PB-1000 and HSU VTF-1 MK3 subwoofers, and asks about Surround speaker height.

Nick has a nice theater, but some older equipment, so he asks about ideal screen size, upgrading his speakers, whether 5.2.4 Atmos is worth it over 5.2.2, whether it’s ok to use wall-mounted rather than ceiling-mounted Atmos positions, whether dual subs are still worthwhile in a small room, and what streaming devices support the latest formats. And Tony K. asks about curved projector screens, gets our suggestions for a PinPoint Center Speaker Wall Mount and Premier Mounts Low Profile projector mount, confirms if on-ceiling Atmos speakers are ok, asks if the APC J35 with voltage regulation is really necessary over the more affordable J25, gets our recommendation for the Audio Source AMP100 or Dayton APA 102 2-channel amplifiers, and our suggestion to use an NVidia Shield TV or Xbox One for his streaming services. 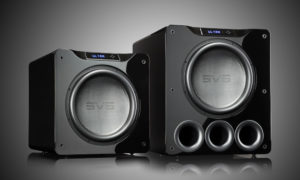 AVRant Podcast had the opportunity to interview Gary Yacoubian, President and CEO of SVS (www.SVSound.com).

We talk about their new SVS 16-Ultra Series subwoofers, their recently launched SVS Prime Elevation speakers, what exciting new products might be coming next, as well as questions directly from our AVRant Listeners!

A video version is available on our YouTube page under the title: AVRant #515: SVS Interview Dec 2016.

Our Listener of the Week is Chris S. for letting EMP Tek know that he heard about them from AV Rant.
In the news, Google Cast is rebranded as “Chromecast Built-in”. And Samsung bought quantum dot innovator QD Vision.
Infinite Gary saw Audioholics’ video of the Martin Logan demo room and thought it sounded terrible. And Justin B. (and Rob) confirm that a new Marantz firmware update allows Dolby Surround Upmixer to work on DTS signals, and DTS Neural:X Upmixer to work on Dolby signals.
Josh S. wants an affordable TV with good sound, so we suggest the combo of a Vizio D-Series TV with a Vizio C or D SoundBar. Jonathan F. prods us to rant about a Lumin D1 Audiophile Network Music Player review. And Bobby K. asks about Audyssey Low Frequency Containment and any other methods to avoid bothering the neighbors.
Matt G. asks about using dual subwoofers in an open concept room, as well as matching sealed subs with ported subs. Anand wants us to speculate about the future of quantum dots vs. OLED. And Monty N. tries to sort through IPS vs. VA LCD panels, 60Hz vs. 120Hz refresh rates, screen size vs. price, OLED burn-in, calibrating his image, the Oppo UDP-203 Ultra HD Blu-ray player price point, and how ATSC 3.0 tuners will work with PCs.
David F. needs some help setting up his BenQ HT2050 projector and will likely need an ultra low-profile projector ceiling mount. Greg F. and Tara both ask for our thoughts on LG’s Super UHD TVs and get our recommendations for Vizio P-Series, Sony X930D Series, Vizio M-Series, and Samsung KS8000 Series more or less in that order. And Charleston L. wants to know if he’d be better off with four lower output subwoofers or two higher output subwoofers.
Greg P. upgraded to four subwoofers and wants to know if he needs to run Audyssey again. He also wants to know if it makes sense to use a smaller projection screen so that he can better place his flat panel and seating, and whether he should rearrange his subwoofers, as well. Justin B. wants to shop for $2000/pair speakers at Amazon, so we suggest: KEF R300, Dali Opticon 2, Paradigm Signature S2, Martin Logan Motion 35XT, and NHT C 3. And Chris S. gets our suggestion to use AudioCheck.net to make a bass sweep when doing the subwoofer crawl, as well as our thoughts on whether he should upgrade his subwoofer or his Center speaker next. 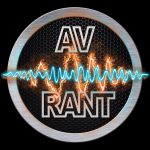